A few technologies emerge every few years and take the industry by storm. One such technology is Blockchain, which is being integrated into almost every domain, be it finance, healthcare, or the web, to help a secure and reliable model come into play. Blockchain refers to distributed ledger technology (DLT), where the nodes are linked together through cryptographic techniques. It follows a peer-to-peer model, where all the participants in the network can record transactions through the mechanism of consensus, thus eliminating the need for any central authority. Mobile app security is a significant concern today when cybercrime is at an all-time high and frauds/ data breaches are widespread. 50% of apps with five to ten million downloads include a security flaw. Apps are weak links to data privacy, and third parties may misuse the loopholes to extract sensitive information.

Blockchain adds a new dimension of security and decentralization to these apps and ensures that secure transactions can be carried out. The whole model is built so that penetrating through the data and deciphering certain information becomes extremely tough for hackers. Thus, Blockchain is widely adopted for mobile app security to make the user experience extremely reliable and secure.

The mobile app industry is expected to become a billion-dollar industry in the next two-three years and might even touch the trillion-dollar mark in the upcoming years. This shows that the user demand is immense, and investment in this field can be quite profitable.

According to estimates, the global mobile application market will grow at a CAGR of 13.4% between 2022 and 2030.

The growth rate is forecasted to increase at a steady rate in the next decade or so. This implies that the mobile app market will only expand, and new technologies and strategies must be adopted to satisfy consumer requirements.

From the mobile app security aspect, it’s evident that protecting confidential information becomes a huge task, especially when it comes to enterprise apps. These contain tons of personal data, which can be misused if fallen into the wrong hands.

Blockchain does help to enhance mobile app security, as it is based on a completely decentralized and transparent system. It is crucial for keeping your apps safe and secure and can help integrate complex data into secure systems based on simple models. Just downloading antiviruses on mobile phones is not enough, as even they are software and contain loopholes that can be exploited. Antiviruses have been around for a long time, and most people have figured out how to get past these and obtain protected information.

Even mechanisms such as passwords and two-factor authentication can easily be overridden. Especially in industries such as fintech and healthcare, blockchain features can prove to be extremely useful. Digital transactions can be carried out smoothly and securely using Blockchain, eliminating a significant concern of cyber attacks since they carry tons of sensitive information.

We need to remember many passwords, each specific for a particular app. Passwords are a frequent target for hackers and can be exploited easily.
Blockchain eliminates this need as it is based on a permissionless model. The irony is with Blockchain, you can have password-free apps that provide more security than password-protected apps. When two parties agree on making a transaction, it is performed through an SSL certificate.

Blockchain app developers can store DNS entries on a decentralized platform, making it nearly impossible for hackers to penetrate. The stakeholders’ consent needs to be taken to record a transaction, and thus, no one loophole can be created, as there are usually thousands of participants in a blockchain network. The blockchain network is distributed and decentralized, eliminating the need for central servers where all the data is stored. Generally, office servers can become targets for hackers, and millions of users’ data can be compromised. Though many server security practices and approaches are available, such as SSH, SSL, VPN, and others, they are not enough to ensure security for server-based applications.

Each stakeholder makes changes in a network. Thus, any person/authority has no sole say, making the whole process extremely transparent. This is why businesses are hiring blockchain app developers, as all the stakeholders are notified if any changes are being made in the network, which makes it extremely difficult to tamper with it. Also, no third party is involved in securing the transaction, significantly cutting down the risk of fraud.

How To Integrate Blockchain In Mobile Apps For Better Security? 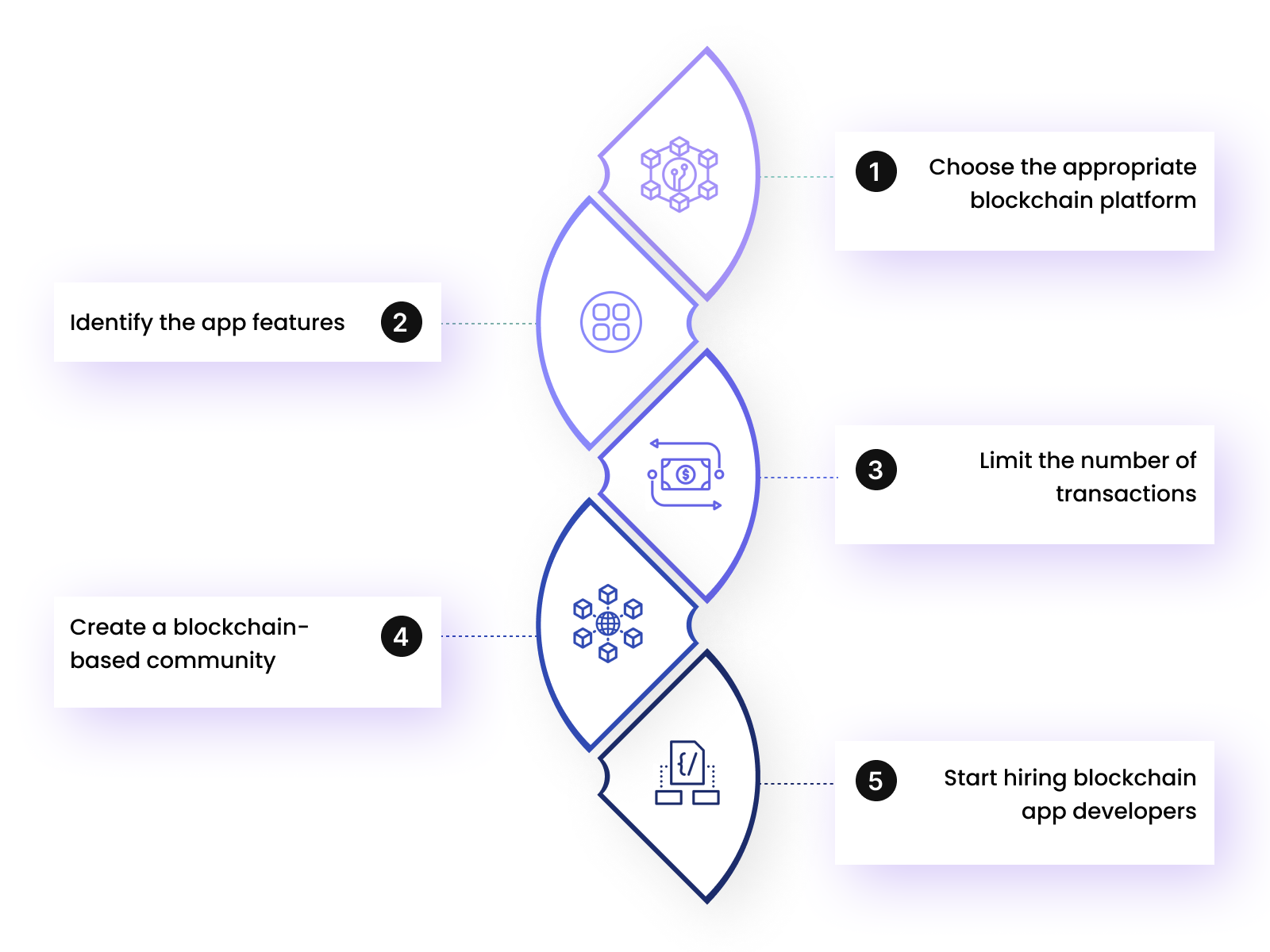 How To Implement Blockchain Technology In Mobile Apps: Tips & Tricks

Select the best design architecture which suits your needs. This means that you should implement a hybrid, cloud, or in-house solution for blockchain hosting. It should be in accordance with the technology stack you are using and the operating system, such as iOS/ Android, on which it will be implemented.

Construct an attractive UI of the app which is clear, well organized, and provides a great user experience. Also, for the backend, the control panel should be monitored, overseeing the whole functioning of the blockchain network.

Through blockchain-integrated apps, even developers can gain major profits. Usually, a significant amount of cuts made through in-app purchases goes to the app store. But, with Blockchain, Developers can incentivize users to use their apps for a set time using a blockchain-based smart contract that eliminates the need for a third party.

Markovate, a Blockchain development company, provides many services to help you build the enterprise-based solution you need. We have a set of experienced developers who can facilitate quicker and smoother transactions while ensuring mobile app security, scalability, and reliability at the same time. Our latest industry-specific practices in our end-to-end blockchain development process to help you make the most of this newfound technology. We use blockchain identity to secure digital contracts, and we can provide your app with a whole new layer of security through this model.

1. Is Blockchain the most secure?

Blockchain is one of the most secure technologies due to its decentralized working mechanism, making it secure, transparent, and free from third-party interference.

2. Can Blockchain protect your data?

Blockchain encourages transparency and decentralization, and multiple stakeholders in the network help preserve the user identity. So yes, Blockchain does come in handy when protecting data, especially those of prominent organizations and companies.

3. How is Blockchain used to implement cybersecurity?

Blockchain is entirely self-sufficient, reduces the need for manual work, and enables decentralization of data, making it harder to create a loophole for hackers, which can result in data tampering.

My main areas of competence include mobile app development, UX design, end-to-end digital product development, and product growth. I hold a Bachelor’s Degree in Computer Science and certifications from the Scrum Alliance. Aside from my work, I am interested in Metaverse and closely following the latest developments.